A visit to Lhasa without visisting Jokhang Temple is not complete. So Jokhang Temple is one of most important attractions in capital city of Lhasa, Tibet. Included on UNESCO's World Heritage list in 2000 as part of the Potala Palace, the Jokhang Temple is in the heart of Lhasa downtown. With an area of 25,100 square meters (about six acres), it is the ultimate pilgrimage destination for Tibetan Pilgrims. 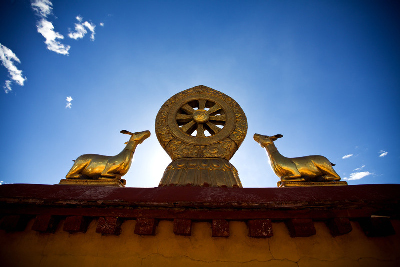 As the most sacred temple in Tibet, Jokhang Temple is situated in Lhasa city and attracts many pilgrims to worship and circumambulating around. The temple was founded during King Songtsen Gampo’ reign (617-650 AD). At that time, the King built the temple to welcome his two brides, Princess Bhrikuti from Nepal and Princess Wencheng from China in Tang Dynasty. Both princesses brought statues of Jowo Sakyamuni as their dowries, therefore, Songtsen decided to build a temple to house these important statues. Together with Jokhang Temple, Ramoche Temple was built as well to place the statue brought by Princess Wencheng. Later, the statue was moved to Jokhang Temple as well for better protection.

The oldest part of Jokhang Temple was built in 652 and after that it has been expanded for several times until 1610 by the fifth Dalai Lama. In 2000, Jokhang Temple was recognized as a UNESCO World Heritage Site as the extension of Potala Palace.

Jokhang Temple is a four stories construction with gilled top. It blends Tibetan Buddhist style, China, Indian and Nepal building design together. The specialty of the temple is its east-west orientation facing Kathmandu to show respect to Nepalese princess. After its construction, the temple has gone through many times renovation from but most of it remains the original style. The total area of the temple reaches 2.51 hectares (6.2 acres).

Inside the entrance, there are statues of “Four Guardian Kings”, two on the either side. Above the entrance, there is a Dharma Wheel flanking by golden deer. It is also the icon of Jokhang Temple. In the main hall, there placed the famous statue of Sakyamuni at the age of 12 brought by Princess Wencheng. It is a gilded bronze statue at the height of 1.5 meters (4 feet). Besides, there are other statues, murals, monks’ residence and a private room for Dalai Lama on the first floor. Encircling the area of statues, there are dozens of chapels. Devout pilgrims will circle around the central area in a clockwise direction. There are usually long queues of pilgrims in front of the chapels, especially of Chapel of Sakyamuni. On the third floor, you can see statues of King Songtsen Gampo, Princess Wencheng, and Princess Bhrikuti. The view on the top roof is fantastic, thus you can spend some time there. 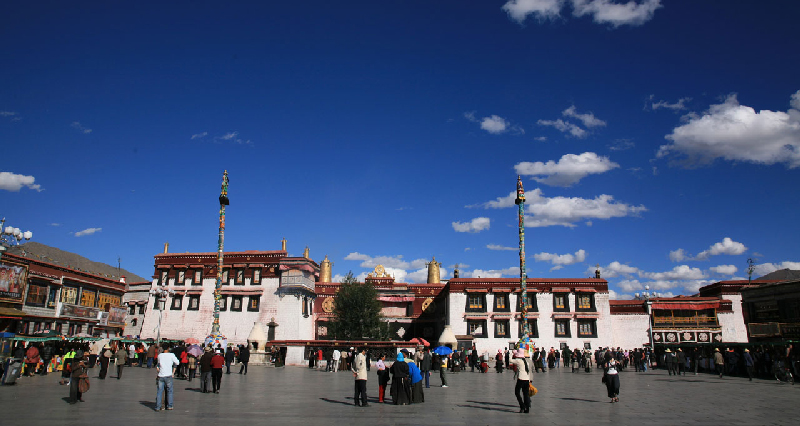 About the Statue of Sakyamuni
The statue of Sakyamuni is definitely a precious treasure. When Sakyamuni was alive, he disagreed with the idea of 'personal worship' and did not allow likenesses of himself to be created. Only three statues which were designed by he himself can be allowed to be sculpted during his whole life. The first is a likeness of him at age eight; the second is for age twelve when he was still a prince of India; while the third is of him as an adult. The statue in the Jokhang Temple is the statue of Sakyamuni at age of twelve. It was presented to the king of the Tang Dynasty and brought to Tibet by The Princess Wen Cheng.

The square in front of Jokhang Temple is the focal point for devout pilgrims. They prostrate themselves and chant the mantra. The two prayer flagpoles with incense burners are surrounded by people all day. There is a stump of willow called “Princess Willow” in front the central entrance. It is said that Princess Wencheng planted it in 7th century. Around the Jokhang Temple is Barkhor Street, the bustling street where pilgrims doing the kora and vendors selling traditional Tibetan stuff. You can buy some souvenirs when walking around the street. 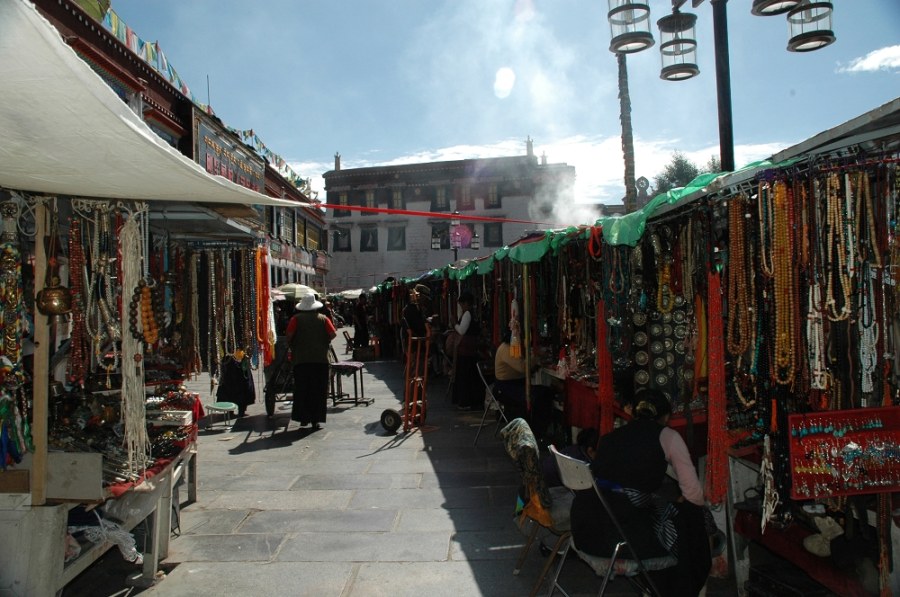 Jokhang Tempe is in the downtown center of Lhasa city, so it is convenient to get there on foot. The admission fee is RMB 85. Opening hours are from 9 am to 6:00 pm. When visiting the temple, please follow the rules (i.e., not touch Buddhist statues, scriptures or other religious stuff.). When doing the kora inside, please follow the right clockwise direction and do not take photos in prohibited area.

Quality Tibet Tours at the Most Reasonable Local Price 2019-2020

Our more than 15 years' Tibetan travel experiences are just for your short holiday. For authentic Tibetan travel services, you get much cheaper prices than any other local Tibet tour operators. We help you explore Tibet at much better prices than anyone else. If none of the tours on our websites suits you, please submit your detailed requests in the form below, optionally you can send email to us by service@tibetctrip.com. You will receive reliable Tibet tour solution shortly. And we will try best to create an amazing journey for you and your friends!

Travel Tips Before you Go